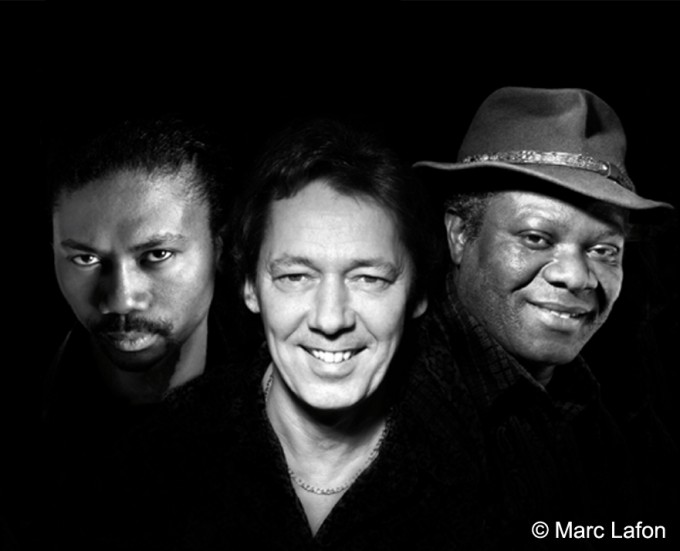 Africa has a lot of modern things to say: with Samb, the prodigy from Dakar, though familiar with Brooklyn, with Wassy, the Cameroonian legend, ever bouncing and surprising, and with Dupont (from Paris) and his hypnotic grooves, a new jazz is emerging, urban and multicultural : deeply rooted phrasings, powered by imagination …

In search of a modern folklore, the trio mixes phrasings from the tradition with the most contemporary concepts in jazz, explores unexpected colors, juggle with scary rhythmic combinations, stimulating and answering to each other at every moment … Based on numerous experiences and a longstanding complicity, their musical world is original, groovy and … quite crazy.

SAWADU released his first album in 2010. So, the band toured in many countries: Algeria, Latvia, Estonia, Finland, UK…

“SAWADU is a remarkable combination which has no borders… The band gets right while also playing with complexity (harmonic and rhythm). An energetic album which provides an overview of their talent on the stage.”
Christophe Rossi / BATTEUR MAGAZINE – October 2010

“What a debut album! With a stunning cohesion, the three musicians of Sawadu lively up each other with a virtuosity focused in the rythm, in an exciting ensemble …”
Benoît Guerrée / JAZZ MAGAZINE-JAZZMAN – juin 2010

“The trio SAWADU, between Jazz and Africa works on the idea of cosmopolitan identity, the identity of today’s musicians.”
Romain Grosman / SO JAZZ – June 2010

“Just saying, this « SAWADU » has the Live energy and an intense accuracy in the studio : perfect for fans of the genre.”
Sophie Chambon / LES DERNIERES NOUVELLES DU JAZZ – May 2010